Sequent Repatterning Therapy is a new hypnotherapy for misophonia developed by Chris Pearson, Yorkshire, UK. This webinar explains SRT and shares patient outcome data from the first 23 patients. The results are VERY hopeful. SRT may be the breakthrough treatment for misophonia that we have been hoping for. Follow-up data from 7 patients treated in 2013 and 2014 indicate that the improvement seen from treatment has lasted for each of them.

Hypnotherapy – SRT (from Understanding and Overcoming Misophonia, available on Amazon.com)

Until Chris Pearson developed the Sequent Repatterning Therapy for misophonia, hypnotherapy had been broadly ineffective or had provided only short-term relief. Misophonia has generally been treated as a phobia by hypnotherapists. Because of the physical reflex of misophonia, it has been impossible for individuals with misophonia to ignore or not respond to trigger stimuli. Actually, as discussed earlier, the misophonic person is responding to the combination of the sound and the physical sensation caused by the physical reflex. We can ignore sounds, but we cannot ignore the physical jolt or sensation of the reflex. 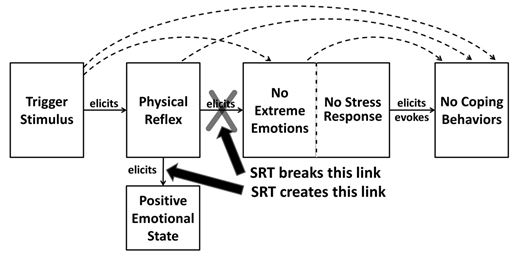 In 2013, Chris Pearson treated fifteen patients using SRT. Patients reported their misophonia severity score from one to ten as a “Subjective Units of Distress” (SUD), with one being non-existent to ten being very severe. Nine had a large reduction in the severity of their misophonia; rating one to three after treatment. Four patients had moderate improvement, with a SUD rating of four to six after treatment (and at least a three point reduction). One person dropped out of treatment and another did not respond to the treatment. In May, 2015, follow-up data was obtained on eleven of the thirteen individuals who responded to treatment. Of these, six had maintained their improvement, four had a decline but still had meaningful improvement, and one with moderate improvement had relapsed. Each had been asked to perform a daily calming exercise several times a day, which took less than a minute each time. Of those doing the daily calming exercise, five of six were maintaining the improvement and one had a decline in improvement.

A major effort is underway by Chris Pearson and the Misophonia Treatment Institute to develop an SRT training program for hypnotherapists so this treatment can be more widely available. As of this writing, we have trained our first SRT hypnotherapists. SRT treatment can be provided by internet video-chat, so SRT is an option for anyone with a good internet connection. We are at an early phase of developing this treatment, but the results of the individuals treated in 2013 make us hopeful that this treatment may provide meaningful improvement to many individuals with misophonia. So far we have not identified any limitations for the applicability of SRT hypnotherapy treatment for misophonia. It has been used to successfully treat individuals as young as ten years of age.

Successful SRT treatment can be accomplished by completing the first four of five steps. This disconnects the miso-emotional response from the physical reflex. A small percentage of individuals respond to the final step of SRT treatment and actually stop having the physical reflex response to triggers. Still, reducing the misophonic severity from moderate to mild or severe to mild is a significant positive benefit for anyone with misophonia.

I believe that we can accomplish even further improvement by combining the SRT treatment with other treatment techniques, such as the Neural Repatterning Technique or muscle relaxation, which work to reduce the physical reflex response to triggers.